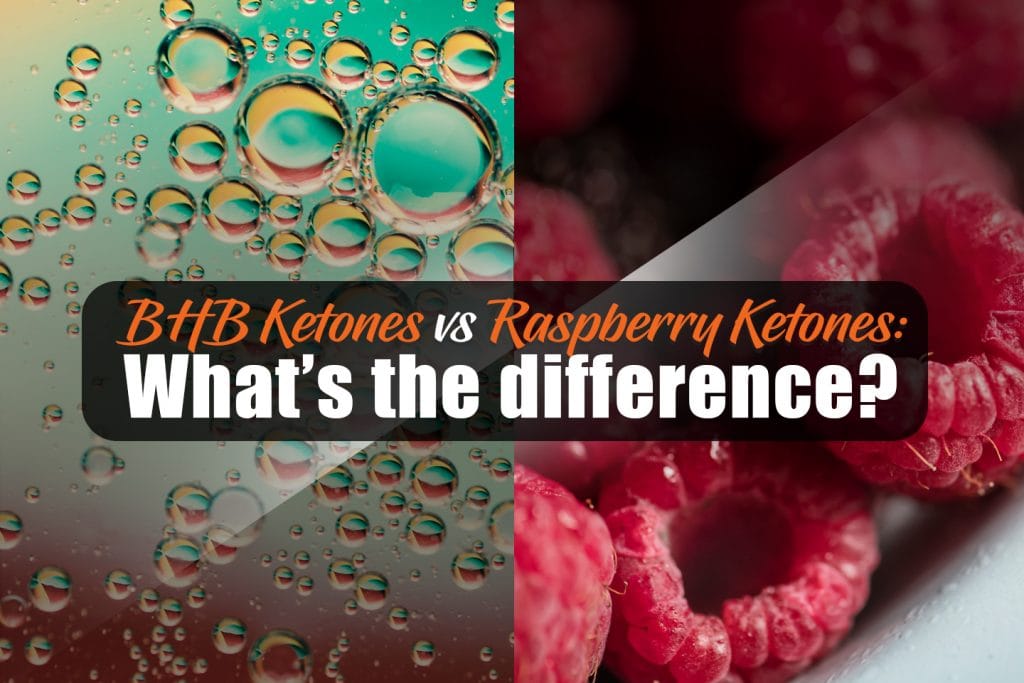 If you’re on a ketosis diet, it will benefit you to know the difference between BHB ketones and raspberry ketones.

The Basic Science of Ketones

When you’re on a ketosis diet trying to lose weight, once your body starts to burn ketones for fuel, you lose weight. It takes a little while to convert from burning carbohydrates to burning fat (ketones).

There are three types of ketones that are burned in the body during ketosis:

These three are created from the breakdown of fat inside the body. They become the source of calories for the person’s energy.

Nutritional supplement researchers have discovered that by adding supplements of the #2 ketone burned during ketosis – beta-hydroxybutyrate (BHB) – the availability of the ketones increases. This means that there are extra ketones circulating in the bloodstream, which can facilitate the ketotic state. It also means there will be a faster weight loss, better ability to concentrate, less inflammation in the body, and better blood sugar levels. Creativity levels also increase when the body is running on ketones.

Types of Ketone Supplements That Are Available

The beta-hydroxybutyrate nutritional supplement is an example of the ketone salts category. This is a supplement where calcium, potassium, or other minerals are complexed with beta-hydroxybutyrate and taste pretty good. They provide rapid energy and of course, increase the body’s ketone levels so you will lose weight faster plus experience the additional effects of running on ketone energy.

Ketone oils are oils such as medium chain triglycerides or coconut oil don’t raise the body’s ketone levels but they are used as a source of energy in the body. They need to be digested first before they can adequately provide energy. Ketone oils provide additional calories that can potentially interfere with caloric consumption needed to lose weight. However, because they don’t contain ketones,

Ketone esters are simply the actual ketone compounds without anything else added. They’re not commonly used as a supplement because they can upset the stomach and cause gas. They would raise the blood levels of ketones but the side effects prevent them from being used.

Raspberry Ketones – What They Are

Raspberry ketones fall in the category of Not Real Ketones At All. The chemical structure of ketones is pretty specific – it has a chemical structure of RC(=))R1where R and R1 are carbon-containing substituents. More simply, a ketone is a compound that contains a carbon to oxygen double bond. Thus, there are a lot of different ketones that could and do exist in nature.

Some of these are found in the raspberry; however, they are not similar to the ones that the body runs on for fuel. The bottom line is that you won’t go into ketosis just by consuming raspberry ketones like you could if you consumed BHB. You might lose weight for other reasons such as a placebo effect where you somehow naturally cut your calories by altering your diet but it’s not the tried and true method of allowing ketosis to help you lose the weight.

Why You Won’t Get Similar Results to BHB Supplements

Technically and theoretically it’s possible that raspberry ketones COULD help you lose weight, as some animal studies show, but the problem is that it will cost a lot to get the pure raspberry ketone product – one that doesn’t contain fillers and even fake ingredients. Even then, the dosage you would need is so high that it would be unaffordable to sustain, whereas the ketosis diet with a supplement of beta-hydroxybutyrate is more economical plus gets the job done very efficiently.

Raspberry ketones got a lot of hype as a diet supplement when Dr. Oz started talking about the supplement on his television show. Since raspberry ketones were commonly used to flavor ice creams and beverages and even add a raspberry smell to different perfumes and approved by the FDA on their Generally Regarded as Safe list, they were assumed to be easy to market for the diet industry.

Some studies do show that the raspberry ketones are associated with higher levels of adiponectin. This is a hormone that works well to regulate blood sugar levels and metabolism. The molecular structure is similar to that of capsaicin, a medicinal ingredient in chili peppers that raises metabolic rate. So some scientists or health advocates made a jump in reasoning to conclude that whatever chemical structure is similar to capsaicin would also work like capsaicin in the body. This is not necessarily true and more studies have to be done on the matter.

To sum up, if you are on a ketosis diet and want to obtain quicker results of elevating your ketone levels, taking a beta-hydroxybutyrate supplement is a much better solution than raspberry ketones.