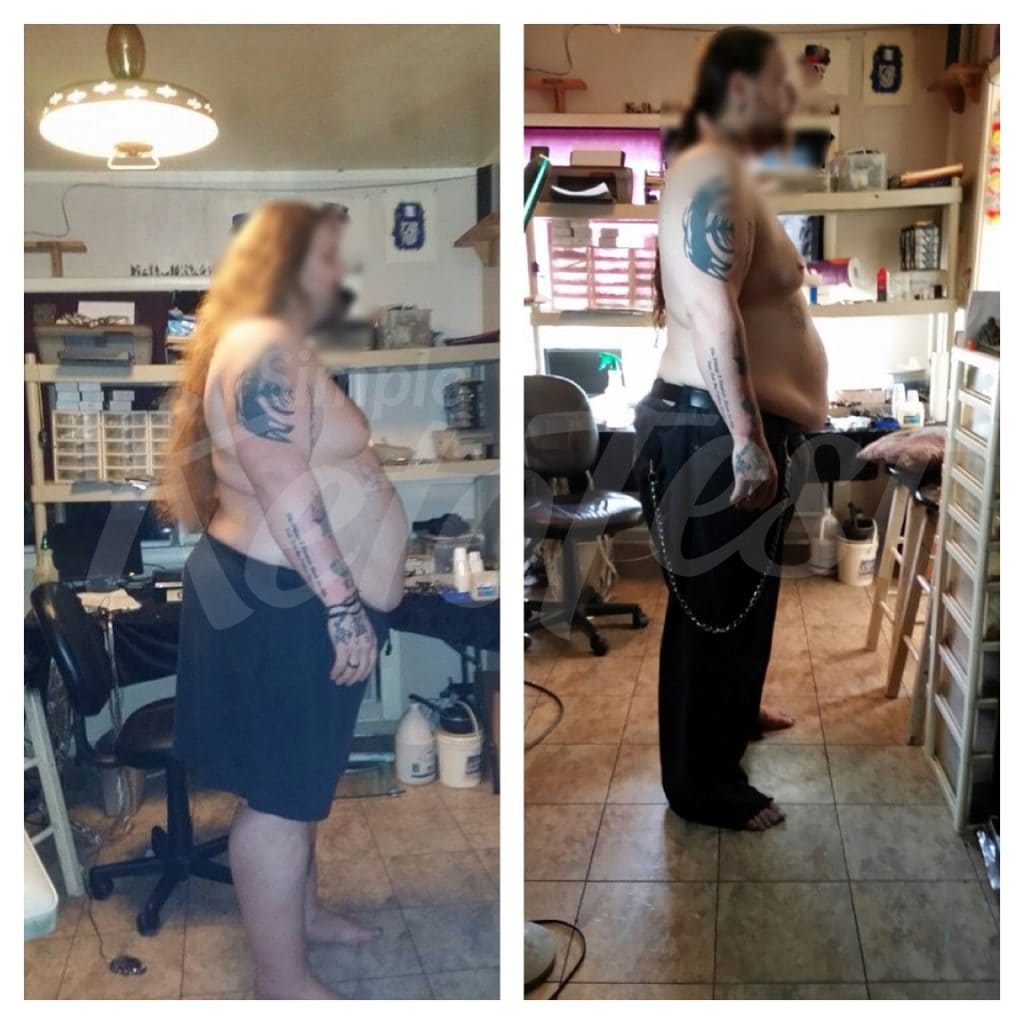 My husband’s name is Mike. He is forty seven years old and a devoted father to four girls.  He is currently “retired” due to a physically disability and awaiting a decision to be made on his disability claim.

He has struggled with his weight all his life and tried MANY different diets.  All seemed promising at first but inevitably none of them provided a sustainable weight loss solution.  Five years ago he started experiencing more pain than normal during his every day job as a manager at a large international retail store.  Over the years the pain continued to get worse until about two and half years ago he could no longer even get through a full shift at work.

He was diagnosed with severe arthritis in his knees, hips and lower back and degenerative disk disease in his spine.  Additionally it was found that he had high blood pressure and was borderline diabetic, among several other ailments that he didn’t know about.

Over the next two years his weight increased, because of his inability to be as active as he once was, until at his highest he weighed over five hundred pounds.  He began to notice that his legs and feet were constantly swollen so large he could no longer get his shoes or riding boots on.  He was getting weaker, could not sit, stand or walk for longer than fifteen or twenty minutes at a time.  He could not lay down flat in bed.  His doctor insisted that the only way to ease these symptoms was to lose weight.

After doing some research he discovered the Keto, low carbohydrate, philosophy.  Immediately he cut out all bread, pasta, high starch vegetables, sweets and soda.  His daily diet consists entirely of Keto friendly foods now.  Leafy greens, avocados, lean meats, cheese and citrus fruit are all on his list of daily go to foods.

He has been following this plan for roughly three to four months now and at his most recent doctor’s visit his weight was down to four hundred sixty six pounds.  The first couple of months were a little slow going as he adjusted to giving up his favorite foods.

These last two months have showed substantial improvement though.  He has lost 24 pounds in the last two months alone.  Our scale only registers to five hundred pounds so we don’t know exactly where he started but it was over that and took almost a month to register on the scale.  He estimates that he has lost between forty five and fifty pounds.

In addition, he’s been able to walk or stand for slightly longer than before, he’s been able to ride his motorcycle again (for short distances) and even help with small chores like weed eating and washing dishes.  He is happier, healthier and more determined than ever to see this through until he reaches his desired weight.

What did you personally do in your first 10 days of Keto?

The first ten days he focused mostly on researching.  He really wanted to know what foods he could and couldn’t eat, in what portions and how often.  He made lists of foods and printed out Keto friendly recipes.  The first foods to go were bread, pasta and sweets which were replaced with mostly chicken and spinach salads and the like.  This particular salad is still one of his favorites since he began this journey and he eats it three to four times every week.

How has your life changed since going Keto?

The benefits to his health and happiness are many, even at this early stage in his weight loss journey.  He is able to stand, walk and sit for longer periods of time.  He has recently been able to ride his motorcycle more comfortably again.  When he is active, he finds it slightly easier to breathe and he’s been sleeping easier.  The physical difference in his appearance has done miracles to boost his self esteem and overall happiness with himself.  All of the early diabetic symptoms have disappeared entirely.  The swelling in his legs and feet is gone, the diabetic blisters are gone, even his blood sugar is back within a healthy range.

He does not seem to have hit the dreaded plateau yet.  He is expecting it soon though.  He has experienced the plateau with other diets he has tried.  The success he has seen with this has him more determined than ever to just stay on track and push through a plateau.

His drive and motivation comes from his desire to live longer for his family and his burning desire to get back on his bike for charity and awareness rides which are generally several hour long rides.  He wants to be able to share in the lives of his four daughters and share their experiences as well as share the experiences of the charity and benefit rides with them.

So far his favorite Keto friendly meal is chicken salad made with grilled chicken, spinach leaves, cherry tomatoes and shredded cheese.  For a salad dressing he generally chooses either a honey mustard salad dressing or red wine vinegar, shaken in a zip lock bag to coat everything with the excess drained off.

Finally, what advice would you give someone who is just starting out on Keto?

Research, research, research!  Do your homework.  Find the right recipes for you. Most importantly, stick to it!  Inevitably, you will reach time when you don’t seem to lose any weight.  Often this can be partially attributed to the gaining of muscle, as you lose fat.  Just keep at it and after a short period you will begin to lose again.