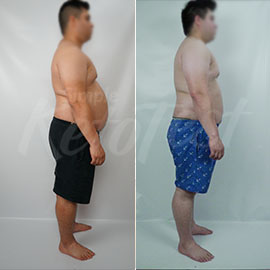 My name is Kelvin from Fort Worth, Texas. I’m a 27 years old male. I’ve been on the Keto diet for 4 months starting New Year’s 2019. I started the Keto diet because I tried every other diet. I tried eating six times a day in small portions. That didn’t work. I tried going vegetarian and that was very unfulfilling. I also tried eating one big meal a day but the crashes at the end of the day were a nightmare. That didn’t work out either.

My metabolism began to slow down once I hit 25. While working for a fast food restaurant I got obese very fast. I quit the job but the weight did not come off. Before that, I never worried about my diet. But seen that the weight was not coming off even though I was doing everything right, I was at my breaking point.

Finally, I came across an article that talked about the Keto diet. I started to read about the diet and I decided to try it. The thing that most convinced me to try the Keto diet was the things I learned. We’re told that carbohydrates don’t matter and what matters is counting calories. The Keto diet tells you that calories don’t matter what matters is eating less carbs. That made me think and I dug deeper into what carbohydrates were. After researching carbs it was clear to me that carbs were responsible for the extra pounds in my body.

What did you personally do in your first 10 days of Keto?

The first ten days of starting the Keto diet I threw everything that contained carbs away. I especially dumped all the food that contained sugar, right into the waste bin. I divided my food portions for the week in seven containers. One container for each day, for two meals a day.

I started to count macros and micros but I stopped. Now I eat until I get satisfied. And since I’m not eating any carbs, only meat my I get full very fast.

How has your life changed since going, Keto?

My life changed dramatically while going Keto diet. I have lost weight and I have more energy during the day because I don’t experience sugar crashes. The other positive is that I’m not running to the restroom five times a day because meat takes longer to digest.

I did encounter a plateau where I intensely craved carbohydrates. This started happening in the third month of being on Keto. I got over it by eating one meal of carbohydrates at least once a week. It keeps my carbohydrates cravings in check. It’s my 90/10 rule. Ninety percent Keto diet and only ten percent carbs diet. This allows me to still enjoy carbs with friends and family. It also reduces the cravings for carbs during the week, because I know I’m not restricted. We all know how our mind plays tricks on us. The one thing that we are not allowed to eat it’s the one thing we want the most. So to keep that urge to eat carbs at bay I just do it once a week and it’s been working great for me. I make sure that I never put any carbs in my shopping basket while grocery shopping. That way I don’t have any carbs to crave at home. When I do eat carbs once a week is usually while I’m out with family.

My motivation to keep going with the Keto diet is because it has changed my life. I have more energy during the day with no brain fog or sugar crashes. You won’t know how it feels to have a clear mind until you try the Keto diet. I have lost weight and I know I’ll be healthier when I get older.

My favorite Keto recipe is Cream Cheese stuffed Jalapenos wrapped in Bacon. It completely satisfies my craving for dairy, meat, and veggies. It’s also a very simple recipe to make. I don’t spend that much time in preparation and it tastes phenomenal.

Just do it. Throw away everything that contains carbs in your pantry and fridge. Most likely you have never experienced a day in your life without carbohydrates. The only way to know how great it feels to be carbs free is to try it yourself. Also, the majority of people have no idea how harmful sugar is. Just because it’s edible it doesn’t mean it’s good for you. Sugar and carbs are the worst culprits for many health problems people face today.