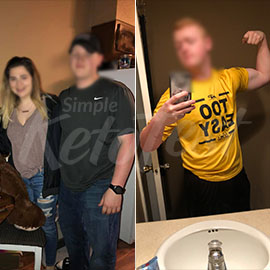 My name is Gage, and I am a correctional officer at a county jail. The high-stress of the job got to me, and over time I resorted to stress eating. Before I knew it, I had started to gain a lot of fat in my torso area. My work shirts began to stretch, and my belt was just for looks because my pants were tight enough around my growing waistline.

When I got on the scale one morning and I had gained an extra 15 pounds, bringing me to 225, I felt awful. I dragged myself through the day and was just a ball of self-pity. That night, I made the usual unhealthy dinner, but it hit me as I began to eat: my weight wasn’t just affecting my self-esteem, it was affecting my safety. Walking into a volatile environment every day with an extra 40 pounds of body fat was producing safety hazards for myself and other officers because I just couldn’t keep up in high-intensity situations. I decided that night that I was going to lose weight and become the officer I need to be in order to keep my coworkers, and myself, safe.

I began the Keto diet after researching it all over the internet and talking to some family members that had tried it. The diet sounded awesome: all the meats and vegetables you can eat! However, I soon found out the difficulty of culling my addiction to carbs. I persevered through the tough spots, and I have managed to become much stronger than I was while leaning down to a weight where I am able to keep a high-intensity tempo for a longer period of time. The Keto diet has not only made me feel better about myself, but it’s also helped me scrape by in some situations that I cannot imagine the bigger me handling.

So far, I have lost 30 pounds on Keto since starting in early March, around two months ago. I don’t plan on quitting anytime soon, either!

What did you personally do in your first 10 days of keto?

I quit carbs cold turkey! I didn’t track anything: calories, macros, or even carbs, but I avoided any sugar intake, bread, pasta, and starches like they were the devil. Taking away my body’s main fuel source suddenly made me feel drowsy no matter how much I slept, so I resorted to energy drinks and caffeine to keep me alert during my shifts. The drowsiness subsided in a week or two, and I managed to lose a huge chunk of weight within the first 10 days. It was easily the hardest 10 days of dieting that I have encountered so far, but the diet became much easier once I had beaten the dreaded “Keto flu”.

I strictly keep up with my carb intake, but I do not track my protein or fat macros. I keep my carbs under 20g a day, but I have no idea of how much of anything else I eat, and honestly, I do not know how much I need. Once my weight loss slows down and I begin to come close to my goal, I will probably keep up with my macros a bit more strictly, but until then, I will only watch my carb intake.

How has your life changed since going keto?

I just feel better! I have more self-confidence, I am safer at my job, and I am happy knowing I am on a road to becoming one of the fit people I used to be so jealous over.

I started at 225 pounds, and all the way until 205 pounds the progress was quick and smooth. When I hit 205, though, I felt stuck. One weekend, after being frustrated for so long, I had a cheat meal of pizza and fries. After the meal, I felt so disappointed in myself. When I started back on Keto, I had a reignited passion, and within a few days, I weighed in at 204 and broke my plateau.

Once I realized that being physically fit correlates directly with my safety in my job, I was (and still am!) pretty motivated to lose the fat and get in shape. The big muscles don’t hurt, either.

At least once a week, I eat a steak. Salt, pepper, garlic, and throw it on the grill. Simple and delicious!

Besides the steak, the Fathead Keto pizza has saved me a few times when the temptations were beginning to overwhelm me. If it’s cooked right, it takes better than a lot of pizzas available at any local grocery store, and it has almost no carbs.

Have a goal! Mine was getting fit for safety at my job. Yours can be almost anything, even if it’s getting fit just to get fit. You’ll need a goal to look to for motivation on those hard days when those french fries are calling your name.