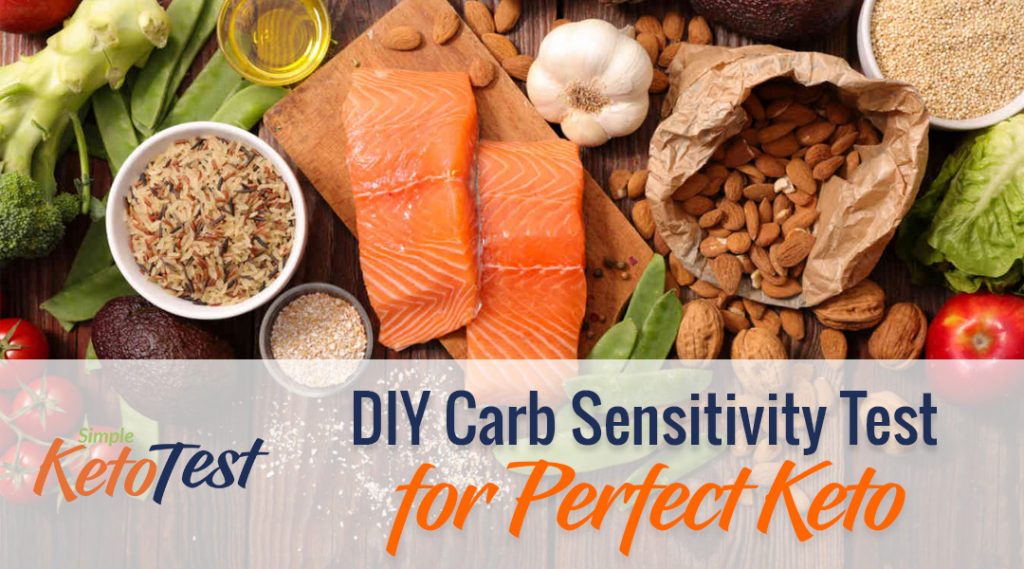 A Carb Sensitivity Test is the best way to find the perfect keto macro ratios for you.

When you’re new to keto you might find it difficult to know what ratio your macros should be in, so you download a handy app to calculate your keto macros for you. You stick to it religiously, monitoring every morsel you eat, but somehow you still can’t seem to lose weight…

Every calorie is accounted for and your percentages look perfect on the app. You can’t understand why keto isn’t working for you.

Don’t worry, you are not alone!

The fact is that while these apps are great for tracking your daily intake, they aren’t so great at working out your specific keto macro needs. They use “algorithms for the masses”, but each of us are unique in our own special way.

So you might not be in true ketosis, which is keeping you from losing weight as quickly as the keto experts promise. On a keto diet your weight loss and keto macro ratios boil down to your personal carbohydrate (and protein) sensitivity.

An app on your phone cannot tell you how sensitive you are to carbs or protein.

It may be suggesting you eat more carbs or protein than you should to maintain optimal ketosis. Which prevents you from losing any weight.

Even if you are losing a bit of weight you may still not be in optimal ketosis, which is making the whole keto diet thing a saga instead of a sinch. But how do you calculate what your carbohydrate (and protein) sensitivity is?

It’s as simple as chewing a cracker.

This test is based on a relatively new study by Sharon Moalem, who suggests that simply chewing on a cracker for 30 seconds can determine how well your body digests carbohydrates.

The theory is that the amount of amylase in your mouth (the enzyme that breaks carbs down into sugars) will determine how long it takes for the cracker to start breaking down and tasting sweeter. And it WORKS!

In a student study, the first student to detect a sweeter taste did so after only 17 seconds of chewing their cracker. Another took 35 seconds before detecting a change in taste and some reported no change in taste.

But what does this mean?

The better you digest carbs, the less sensitive you are to them. The student who detected a sweeter taste after only 17 seconds had the most amylase in their mouth, so they are not sensitive to carbs because they are more adept at digesting carbs. While those that took 30 seconds or longer have very little amylase present, are sensitive to carbs and should monitor their carb intake closely.

The great thing about this test is that you can do it at home! All you need is a cracker and your cellphone stopwatch. Start the stopwatch as soon as you put the cracker in your mouth. Notice how the cracker tastes when you first bite into it. Then keep on chewing until you start to notice a change in the taste – it starts tasting sweeter. As soon as you notice the change, stop the stopwatch. You can spit the remaining cracker-goo out at this point.

How long did it take for you to notice the change?

You have a higher than average amount of amylase present and can eat more carbs than the average person. On a keto diet, you may be able to get away with up to 50g of carbs per day (or more) and still stay in ketosis. But increase your daily carb intake steadily and monitor your ketone production instead of jumping straight to 50g carbs per day. Stop increasing your carb intake as soon as you notice you’re producing less ketones and go back to the last amount you still noticed no change. So if you notice you produce less ketones at 35g carbs, go back to having 30g carbs.

You have an average amount of amylase and fall under the regularly suggested keto macro ratio of 10:15:75 carb, protein and fat ratio. If you’re having trouble losing weight try lowering your protein intake rather than your carb intake. Your plateau may be due to the way your body digests protein instead of carbs. Remember, excess protein gets digested and stored in the same way carbs do.

You have less amylase than the average person and should watch your carb intake very closely. It’s difficult for your body to digest carbs and that means that you fall in the category of people that have to have less than 20g of carbs per day in order to stay in ketosis.

This test will give you the average of how sensitive YOU are to certain glucose producing foods and help you determine what your specific ratios are. After running the test you may find that you can have slightly more carbs a day, that you’re sensitive to protein and not carbs or that you should really cut down your carbs to an absolute minimum.

Once you know whether you digest carbs well, or you’re sensitive to carbs, it’ll be much easier to reach the optimal ketosis zone and the pounds will start melting away!Well, you could go for a series of pricey MRI scans, or you could get our Simple Keto Test Strips and track your progress at home.

Start with our baseline ratio, 5% carbs, 20% protein and 75% fats, with the carbs amounting to no more than 20g total carbs.

Assuming that your calorie intake is in deficit to lose weight, let’s make your total calories per day 1505. This is an easy deficit to maintain for the average person and you won’t really feel like you’re starving yourself in the process.

But if you have different needs, for example you’re reasonably active, or you are slightly taller or shorter than average, feel free to adjust the total calories up or down.

BUT: Remember that you risk losing muscle mass if you go below about 1300 calories per day for an extended period of time. And muscles burn calories, so you’ll be making it even more difficult to lose weight in the long run if you lose any muscle mass.

Once you’ve decided what your personal calorie intake requirements are, get the amounts of each macro by dividing your total calories by 100 and multiplying by the percentage for each macro.

Your daily calories from total carbs will be 80 cal, or about 20g, with no more than 20g net carbs.

VERY IMPORTANT: Remember that fiber amounts to 2 cal per gram and this can actually be what is keeping you from losing weight if you’re highly sensitive to carbs. So if you eat 16g (64 cal) net carbs you can have 8g (16 cal) fiber for a total of 80 cal and 24g total carbs. The total calories are your indicator for carbs, more so than the grams.

If your total daily calories is 1400:

If you want to calculate your own amounts the following may be helpful:

Then it’s time to start testing!

Do a keto test when you wake up and between 30 min-2 hours after each meal for a total of 4 tests each day. Take note of the amount of ketones you’re producing and how this relates to what you ate.

If you had processed starch for lunch and you see a dip in your ketones, it means you are sensitive to the carbs in what you ate. If you had a large steak for dinner and woke up producing less ketones that the morning before, where you had eggs and bacon with mayo and butter for dinner the night before, this means you are sensitive to protein and it’s equally important.

The optimal keto zone is clearly marked on the strips, so it should be easy to tell when what you ate is having the wrong effect and making you produce less ketones.

Do this for about 3 days, which should be enough for you to get an idea of your ketone trends. Then take a look at your ketone counts at the different times each day and how this corresponds with what you ate.

If you find that your ketone levels dipped after eating a specific food it means that you are sensitive to this and that it is the culprit keeping you out of optimal ketosis. It could be a starchy carb or even a certain type of meat. Some people’s digestive systems are really good at breaking down protein, which means it’s absorbed in the form of glucose, which makes it “the same as carbs”. The same goes for fiber!

So how do you adjust?

If you find that your ketone levels are stable, but still low and it’s rather infuriating, try increasing your fat percentage and decreasing your protein percentage.

If you find that meals with lower amounts of protein keep you in the optimal ketosis zone, more so than meals with a lot of protein, you can also raise your fat percentage and lower your protein percentage as shown above.

If you find that a certain type of protein makes your ketones dip, try replacing that protein with another that doesn’t have that effect on your ketone levels.

Don’t change too much of the diet at once! Rather do the test series a couple of times so you can isolate exactly what it is that’s keeping you out of the optimal ketosis zone.

Follow your “new” keto diet for 5-7 days, keeping track of your ratios. Then run the test series for another 3 days. Have you improved? What is still causing your ketone levels to fall? Are you very sensitive to carbs or protein? Which types of carbs or protein are you most sensitive to?

This test will give you the average of how sensitive YOU are to certain glucose producing foods and what your specific ratios are. After running the test a couple of times you may end up finding that your best ratio is 13,5% carbs, 10,5% protein and 76% fat, or even 8% carbs, 19% protein and 73% fat.

But once you have your specific ratios there is nothing that will keep you out of the optimal ketosis zone and the pounds will start melting away!